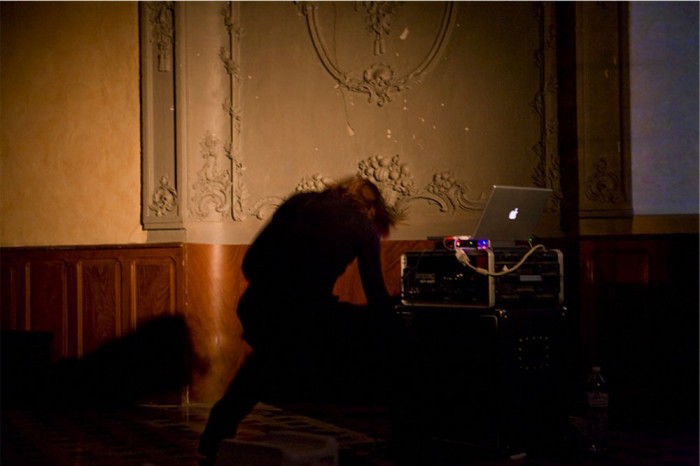 The circular motion of Febuary 21st 2006, voted by Interior Ministry of France, lays down the law on how to legally arrest conditions for illegal immigrants. Given they’re under arrest only on the outside, it thus legislates on what may be considered as a domicile or not: courtyard, yacht, operating theatre… A videoprojection displays the text of the circular motion like credits at the end of a blockbuster film, with its typical music. The performer faces the projection and repeats the text. Her behavior changes progressively, transforming itself towards an attack of the apparatus. The whole situation points out the warlike fiction suggested by the text, which gradually contaminates the performer’s mind, to the point of an extreme violence. 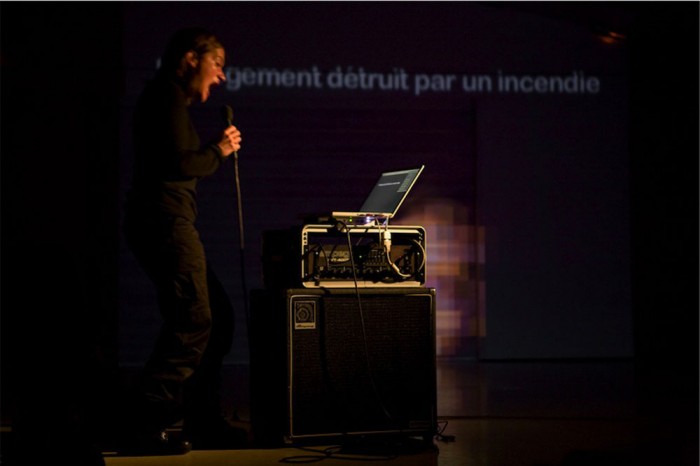 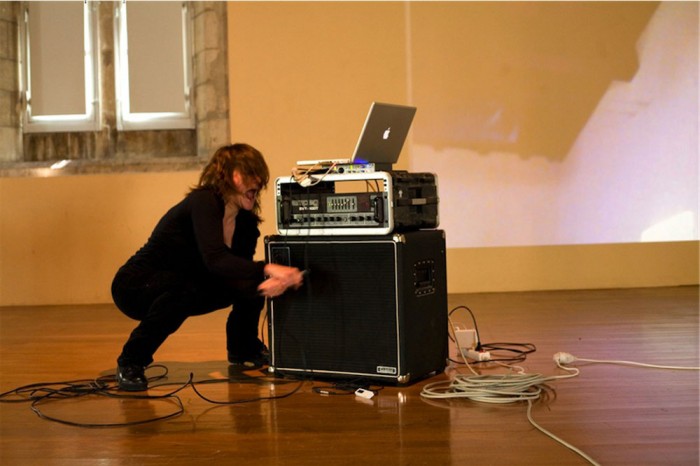 Residency starts with the music of an American war film, all brass and drum rolling, that could be Independence Day or Medal of Honor: a ceremony stirring patriotic fictions from their slumber.

The set-up including laptop, amplifier and videoprojector starts up by itself, blasting out the music and projecting an image, a recording of the performance room itself. The performer comes closer, and finds themself faced with a screen, a teleprompter, and so takes the microphone and begins to read the scrolling text. Their face appears as a close-up on the videoprojection, the camera’s point of view is that of a computer filming its user—except that the face is entirely pixellated, like the privacy protection used on TV talk-shows.

The scrolling text also appears on the video projection, superimposed on the face, at the same time as it appears on the teleprompter’s screen. It’s made up of excerpts from the ministerial circular released on February 21st 2006 by the Interior Ministry, detailing the conditions of legal arrest for foreigners in breach of national borders and migration laws, stipulating the steps necessary to effect apprehension “on public streets, at government or police shopfronts, at home or within housing complexes.” (Circular NOR : JUSD0630020C – Crom.06.5/E1-21.02.2006).

Given that most such arrests are to take place outside, this circular is distinct in that it therefore legislates on all spaces considered to be a dwelling or not: apartment, building corridor, pleasure craft (yacht), abode destroyed by fire, operating theater, etc. It’s in this sense that excerpts were selected to underline this distinctness.

The performer thus carries out their reading of the text, in a literally “closed circuit” arrangement, as if the whole set up—composed of computer, microphone, amplifier and projector—composed all of the content, its transformation and its very own fiction. The text is processed like the opening credits to a blockbuster that might have stimulated its author’s imagination; it progressively contaminates the performer to the point of extreme violence. The actress’ voice slowly deepens and lowers as the text lists the possible arrest locations, and the calm balance is broken when, with a monstrous Darth Vader voice, she literally attacks the amplifier with the microphone, the audio feedback creating extremely violent sounds of fragging and explosion. After a short, intense attack, the music leaves the fields of battle to take on characteristics befitting redemption, that telltale register of a war film finale, and the spoken delivery of the circular ends with its two last moments: the statement that an operating theater is an acceptable location of arrest, and the list of administrative recipients for the circular.